I could never deny this country it’s overpopulation in the capital city of Phenom Penh. Not the seemingly hundreds of children laughing and screaming while chasing the pigeons to their hearts’ content. Nor the endless traffic jams of tuk-tuks, buses, motorcycles, cars and bicycles all in a “rush-hour” mosh! 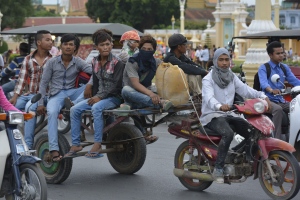 It was 40 years ago that this city was a ghost town, emptied out by the sociopaths in the Khmer Rouge. The city population forced into the countryside to establish a new order. In the end, nearly a third of the population perished in this bloody post-Vietnam fratricide, and another large number fled to other countries.  All the artisans and educated class gone, one way or the other. I recall visiting the city back in 2008. I walked along the street filled with shops of craftsmen trying to recreate the quality of an art nearly totally lost. I also went to a traditional dance performance. The level of artistry just not what you would expect. It will take years to build that up again, but I am confident that this nation of some of the most friendly and accepting people in the world will manage.

a Tuk Tuk sputters past a lane in Phenom Penh

The airport is nearly the same as I recall it from my last visit in 2010. The row of humorless military officers in their wide caps and uniforms stamping your visa application a thousand times was replaced by a row a humorless civilians doing the same thing. Although this is your first impression of the people, you know that just beyond that final chop that will get you into the country, a world of smiling, gentle people await you. The tuk-tuk drivers have standardized their prices now and the trip to anywhere in the city is nine dollars from the airport, not an unreasonable price. The official currency of the land is the riel,  which goes for about 1420 to the dollar. But it is the dollar that is the preferred currency in day-to-day transactions large and small.  There are no coins, so any change under a dollar is given in riels. Even at the ATM’s you can choose to get dollars or riels. The riel is basically worthless once you get on the plane.

The International Golden House Hotel sounds so much more grand than reality offers, but the staff is a delight, the included breakfast good, and the rooms are clean. It is located in the girlie bar section of town and there are 500 tuk-tuk drivers who descend on you the minute you open the door of the hotel. But I like to walk, and walk I do. There is an interesting mix of French colonial and Cambodian culture in everything from the food with croissants and baguette available everywhere—- I love the morning breakfast in  a small restaurant near my hotel that serves of delicious noodle soup and french bread—- to the architecture of the whitewashed buildings along the Quay Sisowath, the main road along the Tonle Sap river. 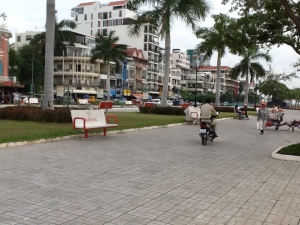 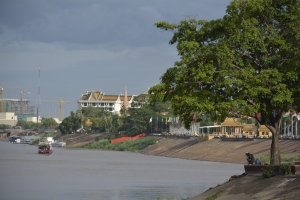 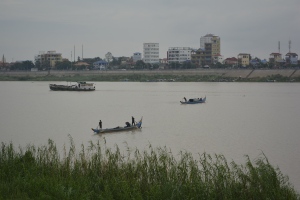 I arrived in time to take an evening walk along the river to the place where it  joins the wide Mekong. I love this walk along the promenade. So many people are here. There is always a breeze, so many take advantage of it for some relief from the hot, sticky weather of this time of year. Unlike Thailand that is experiencing a drought, Cambodia has rain daily in some form. Today we are lucky, the rains fell earlier, so the air is bearable. People are out on the commons before the Grand Palace picnicing, talking with friends, engaging in group exercises, arranging rendez-vous, or even making offerings for good fortune at one of the temples and shrines large and small in the area. Many with a Hindu flavor to the predominant Buddhism. 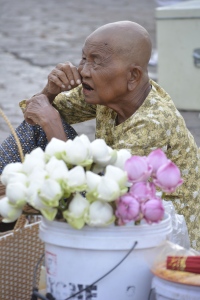 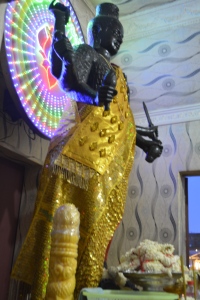 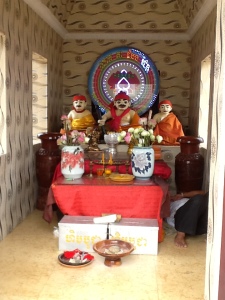 My first full day is a long one. After breakfast, meandered through the twisting morning market where you can get anything you need from food to currency exchange– at a better rate than the banks, of course! I find out that it is better to use the riel because if the price is $2.00, they take 4000 riels each dollar for convenience. Not much of a difference, but it is a better deal! 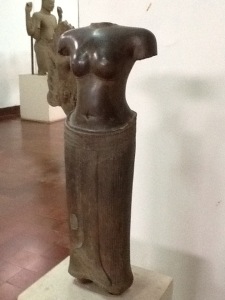 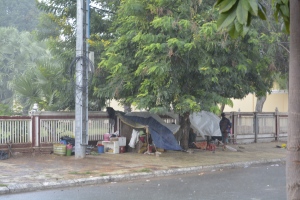 I visited the national museum next. I noticed that sections of the wall, made of cheap plaster, had collapsed as if someone had maliciously damaged it. As I walked on, I found the culprit— homeless people set up plastic and cloth shelters along the wall and the pull of this over time, causes the damage. Such a shame, the damage and the poverty in this one of the poorest countries in the world. I was amazed walking through the streets late at night the last time I was here and witnessing the change-over, especially at the market, of homeless people searching for a place to rest at night and then pack it up and move on as the day begins.

The museum itself is still wonderful with excellent pieces of ancient Khmer art, mostly in the form of sculpture. It just begins to rain as I arrived and it comes down in buckets– cascading off the steep, slanted roofs in rivers splashing on the ground below. It is an experience in meditation sitting next to the courtyard listening to the rain fall in concert with the man-made fountains trickling away. 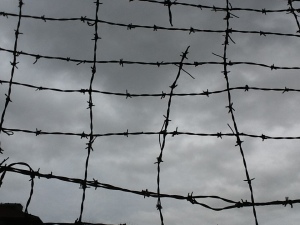 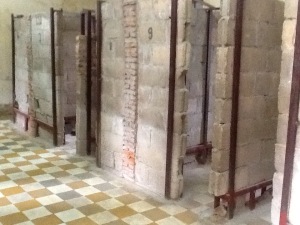 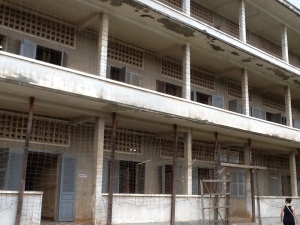 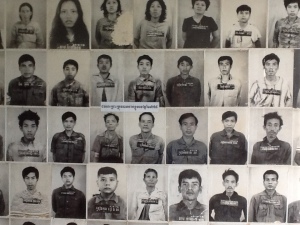 I did not wait for the rain to stop before I left, hailed a tuk-tuk and headed for Toul Sleng, the infamous Khmer Rouge prison. I’ve written on this place in past trips, so I will not repeat it here. But it is still one of the most powerful places I have ever visited. The halls of photos of those killed continues to be haunting, mesmerizing and draining. There are few people here today, probably because of the rain. At one place I found a panel of the rusted original barbed wire that still covers one of the windows. I extended my arm through an opening and couldn’t help but reflect that so many who were imprisoned there must have tried the same thing. How far do you have to extend it to be truly free?

My last stop is the market at Pasar Thmay. It is a distinctively shaped building and is, therefore, immediately recognizable. It has largely become a tourist trap judging by the cheap jewelry shops and store after store selling the same Cambodian t-shirts. 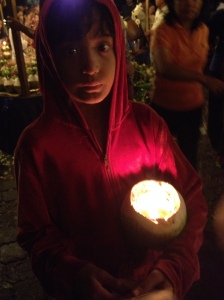 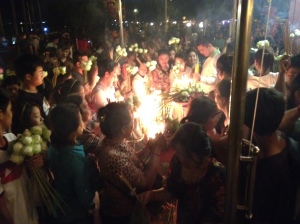 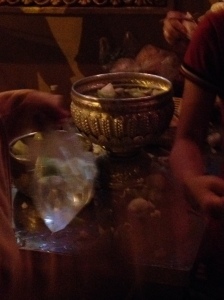 As evening approached, I again found myself drawn to the shrines along the river. So much going on in the name of religion, both devout and chicanerous. This will always happen when people believe that to have their prayers answered, much mystery and ritual must be involved. People selling the mandatory offerings of flowers, incense and coconuts make a fortune. So much is placed in the little shrines, that there are people there to throw these gifts unceremoniously out a back window to make room for more. And I’m sure the flowers that are still in good condition will make their way to the flower sellers again. Also small urchins seem to wander around as it appears that having an “innocent” light your candles and incense sticks will somehow curry more favor with the gods. They move with pots of fire. I’m sure if Dickens had made it to Cambodia, he would have made much of this place. And yet, it is a fascination you cannot miss.

A late dinner and then to bed. Off to Kampot, in southern Cambodia tomorrow. 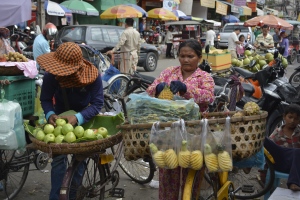 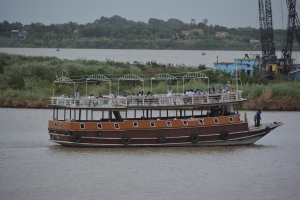 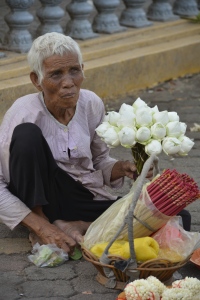 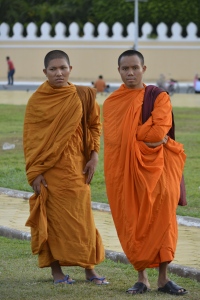