Posted on August 1, 2016 by paquettepaul 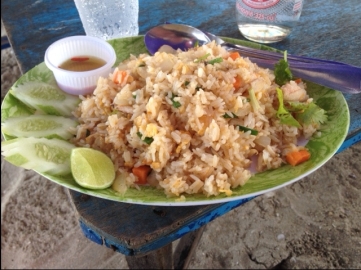 It seems like the only way it will not rain is when I have my umbrella. The other day in Bang Saen, I was out walking. It was a little breezy and I should have known better, but I had positive thoughts and a mission— find my favorite little food stall along the beach, order some fried rice with crab, and relax under the shade of a big beach umbrella.  After two hours of enjoying the food and the sea view, I decided to push on and walk up to the small Lamtong Mall opposite the university. Later as I was leaving, I saw that the sky was getting menacingly gray. I decided to hold back for a bit to see what happened. Within 10 minutes that bank of dark, angry, threatening clouds passed us by without giving up so much as a drop. I was sure we were in the clear, but thought the better of it to get back to the hotel as quickly as possible. No such luck! I was sitting in the minibus when the sky opened up in a torrent. It wasn’t long before I found myself back in my area of the town and standing at the four corners soaked through and through within a minute as wave after wave of wind-swept rain crashed over me. Maybe it was just resignation, but I walked the remaining 5 minutes back to the hotel enjoying the liberation of it all. After all, I couldn’t possibly get any wetter! A security guard, safe and dry in his little shelter outside a condo, looked at me with an incredulous expression on his face and called out trying to be heard above the pounding rains, ” What are you doing? You’re getting all wet!” All I could manage was a smile as I raised my hand in acknowledgement!

The day wasn’t over with me yet, however. When I got back to my room I entered my code, but  I couldn’t get into my room safe. I called the front desk clerk who immediately sent up three people– a day manager, the hotel’s tech person, and the bellboy. Either this was serious business or they all really had nothing else to do at the time anyway. I’m not sure which it was, probably both. However, it was a wonderful little snapshot of Thailand. We all sat there hunkered near the safe. Everything in Thailand is a group process! They spend more time than necessary discussing and weighing all the possibilities that could account for the safe not opening. Of course, the first “suspect” was me. Did I do this and that while setting up the lock mechanism? The fact that the safe was older than God was never seriously taken into account.  The  manager had the hotel code to get into the safe. He tried it once, he tried it twice and finally after the fifteenth time—- well, no, that time didn’t work either, of course. For some reason, he waited until that moment to produce the master key and opened the stubborn safe. When we went through a trial run, it did not work again.  I recalled this happened in another hotel years ago, so  I suggested that they change the batteries and see what would happen. I haven’t stayed in a hotel yet where SOMETHING from a remote to a safe did not work because of weak, old batteries! Well, low man on the totem pole, the bellboy, was sent to fetch some new ones. When he came back jiggling 4 loose cheap-looking Chinese-made batteries, I was a little apprehensive about the outcome, as that usually means he took them out of some other poorly functioning device.  But sure enough, work they did. Smiling faces all around!

They left, and I noticed that the rain had finally stopped. I showered. (How strange to take a shower to feel better after being totally dowsed in rain water!) I walked out on to the small balcony with its wonderful sea view and plopped down on the lounge chair. As I drifted off gazing at the water still churning from the storm, I made a mental note to always carry my umbrella, and pack some fresh batteries from home in the future!

This entry was posted in Uncategorized. Bookmark the permalink.