Posted on August 2, 2005 by paquettepaul

Despite the run-down status of the Thai railway system, at least the first class that I experienced, it was still a nice trip up here. I recall in the late 70’s treating myself to first class passage after working in the dusty refugee camps for weeks on end. I would meet the train at 10PM in the little mountain station in Denchai. Back then, the porters in first class would be in dress whites and the car was all polished brass and wood. Usually, a plate of fried rice and a Coke were in my cabin within 15 minutes. Such a contrast to the refugee camps! Such a contrast to now! Ah, the good ole days! 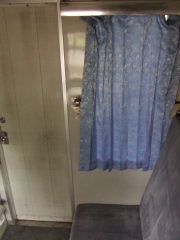 I awoke on train at 5:30. I enjoyed just looking out the window and watching the landscape being slowly revealed by the rising sun. Silent, save the constant beat of the click-and-clack of the train running over the tracks. I put on my iPod and set it to some Thai classical music I downloaded before I left the States. It provided the perfect background to the scene I was witnessing outside the train. By 7AM,  life was stirring in the villages we passed. Farmers were already in their rain-soaked fields separating the rice sprouts so that they could be transferred  to the fields for planting. Work that in many ways has not changed for centuries.

One thing that I did note was that the once-omnipresent water buffalo has largely disappeared from village life! It has been replaced by a mechanized contraption that looks like a lawn mover on steroids with scoops now used for plowing the thick, muddy fields in preparation for planting! Out the window I also saw a shop opening here; a neighbor stopping to talk to a friend on the way to the morning market; yet someone else on their motorcycle perhaps off to work or some unknown destination.

We hear the occasional scraping of the tree branches against the train as we make our ascent from the central plains into the mountains and eventually the valley in which Chieng Mai is located. The sound reminds you that the train is in constant battle with nature. These tracks would have been quickly covered by the jungle had it not been for the daily trips of the trains to destinations north. It is pleasant to see the teakwood trees still growing with their overlarge leaves, and the stands of bamboo knocking in the wind, though I cannot hear them.

The train arrived in the quaint and neat station in Chieng Mai about 6:30 in the morning. We were immediately barraged by men trying to take us to our destinations in a variety of pedicabs, motorized tuk-tuks, minivans, and traditional yet colorful taxis. I got to the Suriwongse Hotel, located near the night bazaar at about 7:30 AM. I had breakfast with Sylvia Dunner and her husband, Uli. I was still feeling a little under the weather, but Sylvia had a medication for travelers called Cipro that had me feeling fine by mid-day! (Cipro is now a “staple” in my travel kit!)

Ach, a  friend’s former student, was going to pick me up at 3:00. I waited and waited. By 3:30 I realized that we’re running again on “Thai time!” I recall I always had to tell Thai friends to meet me 15-20 minutes before I actually wanted them to be someplace! In English we say our clocks “run,” but in Thailand the clocks “deurn,” or “walk.” This difference perfectly sums up both cultures’ concepts of our relationship to time. Ach finally arrived at 3:45 and took me to see his business, a small factory that embroiders designs and lettering on everything from hats to socks. His business is quickly growing, I’m pleased to see. It is truly a family business with his wife, Noi, brother, sister-in-law, and sister all having their parts to play. But clearly Ach is head of the family in all respects. Ach uses his gift of gab, so annoying when he was a student, to parlay a good client base, including orders from as far away as Hawaii. I had to laugh over dinner when I noted to him that his son seemed to be very shy…. so totally the opposite of him at that age! We both had a good laugh at that! In fact, his whole family was wonderfully gracious. Because I was one of Ach’s “extended teachers,” he couldn’t do enough for me. In Thai culture, you can never do enough to repay your debt to your teacher, so everything is done for you! This can be a bit frustrating when you want to show your appreciation to them, however. They feel very uncomfortable with that. You just have to deal with that and send them something nice from the States, or hope you can return the favor when they visit you sometime. It was great to see the obvious care, closeness, and affection that they all had for one another.

We ended up at a place with traditional northern Thai cuisine served on wooden trays called “kantoke.” You sit on the floor propped up by triangular pillows and mats. Stir-fried vegetables, a flavorful curry with pork dish, fried noodles, and even a fusion dish containing canned tomatoes (very tangy). While you are eating, there is a small orchestra playing the classical Lana music of northern Thailand. There is also a show that lasts about 1 1/2 hours. Among the dances was the candle dance I love so much. We didn’t see the “fawn leb,” however. I first saw this dance 26 or 27 years ago on a previous visit to the city. In one of those chain of events long forgotten, some friends of mine and I found ourselves one night out in the countryside in a field with hundreds of Thais. There were huge bonfires burning. I would imagine it was a harvest festival of some sort. Suddenly the Lana music began. The centerpiece of this music was a band of 5 or 6 long drums playing a slow, soulful, methodical and relentless beat. As the bonfires blazed bright, about 30 women identically dressed appeared wearing long, brass “nails” attached to their fingers. In unison with each other and the music, they danced their slow, highly gestured movements. The fire light glinting off the curved brass nails made for an unforgettable experience to be sure. 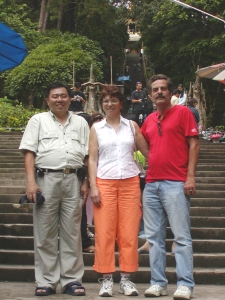 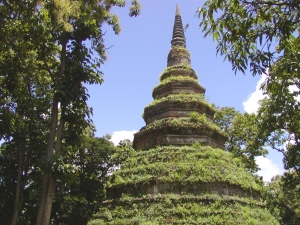 Pagoda at Chieng Saen, first entry point into modern Thailand by the Thais about 800 years ago.

Doi Suteep, Chieng Mai. Located on a mountain near the city, it affords your a magnificent view of Chieng Mai if it is not overcast!

A farmer near Chieng Mai planting his fields.

After my diner with Ach and his family, I ended up back at the night market near my hotel about 10 PM. Chieng Mai is THE place to go in Thailand for crafts! The downside of it all is wondering how I will ever get it back to the States! That is a problem best left to the future .