For the last few years I have been planning to go to Si Chang Island off the coast of Sriracha, a neighboring city and home of the now famous Sriracha Sauce! I woke up one morning and just decided that today was the day! 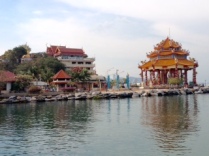 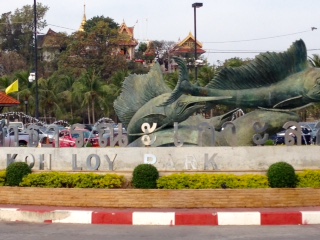 I took off by the trusty minibus to Sriracha at 8am for the 20-minute trip. Then I walked down to Koh Loi, a small island connected by a causeway to the mainland, to the dock to catch the ferry. As the ferries are hourly, I had to wait for the 10am boat.  It’s about a 45-minute trip and cost about 50 baht (about $1.40) one way. As we traveled, we passed many cargo ships ready to unload at the port of Laemchabang not far away.

The island is really amazing, and I need to get back there on my next visit. We arrived at the rickety dock on the island that is crammed with food vendors and every kind of transport imaginable to whisk you away to wherever you may want to go. I opted to get a lay of the land, so to speak, before I committed to any of that. The island is quite hilly, and I was amused to see supped up tuk-tuks that looked like they were the Bangkok version on steroids!You need the extra boost to get over the hills!

I soon found myself at the foot of a hill dominated by the Chao Paw Khao Yie Chinese Shrine. I chose to take the stairs for the exercise and forego the convenient funicular. As it was still Chinese New Year, the site was very crowded with worshipers making offerings and devotions at the smaller shrines in the caves of the hill. I just sat in one of these caves listening and meditating to a melodious flute accompanied by an even more hypnotic drum beat.  The air was filled with acrid smoke from the fireworks set off to chase away the evil spirits, as well as the many incense sticks and yellow candles lit in large sand-filled caldrons. I appreciated the birds-eye view of the sea and harbor from the top, but had to keep moving as there was still so much more to see.

At the bottom of the hill, I decided to finally hire a tuk-tuk for the rest of the day (about 250 baht about $7 US). Along on the journey was the driver’s playful niece, a beautiful child of about three who sat in a baby pouch on her uncle’s chest the whole way. The Thai version of the baby seat! We wound our way along a narrow road to the seaside view park. I told him to come back in an hour to get me. I only wish I had had more time! What a fantastic view of the gulf with a long walkway built in the early 1900’s that hugged the rugged coastline. I did manage to enjoy myself walking along a few of the many hiking trails that lead to perfect, secluded spots to meditate and contemplate the view or life in general.

As we entered the harbor, I took note of a large hill-side yellow Buddha that just called to me for some reason. When I asked the driver to take me there, he looked kind of confused. I guess it is not the place most people opt to go to. I was glad I did. There isn’t much on top except for the statues of Buddha and a lot of rubble that bespoke of structures built in more prosperous times, but again what a view of the harbor! While I was walking around, an old monk beckoned me over. He looked at me and took a cylindrical amulet from the table scattered with a number of potions, amulets and prayer cards. “This will protect you from throat problems and ghosts,” he said. So with a 100 baht donation and many blessings with holy water I was well-covered, with holy water if nothing else. We chatted for a while and I liked his easy going way of talking. I hoped the amulet covers ghosts still alive as well. On that he had no information or opinion.

By this time, it was running close to 1:30, and I still had to get to the Royal Chudhadhut compound. I spent two hours here and again wish I had two more. As soon I entered the park, which was built on the far end of the island as a convalescence spot for mid-19th century foreigners, I was taken by the serenity of the location. It later was taken over as a royal residence of the king. That wondrous wooden palace in Bangkok, Vimemek, used to be located here. The foundation is still visible and you can imagine the grandeur of that palace with that view.

My favorite spot was the isolated Asdangkhanimit Temple. Very interesting mix of Thai, Ceylonese and Gothic architecture! It even has simple stained glass windows that are set off by the white interior.

As I walked back to the meeting place with the tuk-tuk driver, I passed the old residences now mini museums filled mostly with old photos of how the area looked back in the mid- to-late 1800’s.  All along the walk in that special place, I was lifted by the strong, sweet scent of the Frangipani, or “Lilawadee,” that you could smell wherever you went. I am always amazed that such a beautiful, fragrant flower can come from such a gnarled and bent tree. Sort of a life lesson for us all to be sure.

I ended up at the Asdang “Bridge,” actually a long white wooden jetty. I was so grateful that there were so few people there that day. I could just sit there in the lazy heat of the mid-afternoon and take it all in before the very-punctual tuk-tuk driver came to take me back to the wharf for the return trip to the mainland. It wasn’t long before the 4:00 boat was passing the rather odd-shaped Chinese style lighthouse in the harbor with the sight of the Yellow Buddha sitting patiently on the hill with a look of contentment that I could now comprehend. And all the while wishing I had planned on an overnight stay here.

This entry was posted in Uncategorized. Bookmark the permalink.