Posted on September 3, 2016 by paquettepaul

The first thing you notice about Luoyang, indeed most cities here, is the haze of fog and pollution. In the winter, there are even alerts to stay indoors because of the poor air quality. I know first-hand that any lung problem, like a cold, is compounded by the pollution. Despite it all, there is a small-city atmosphere mixed with the towering condos and apartments that are going up everywhere. It’s nice to see that there are large sections of this city that have not succumbed to modernization, and retain some of their character and charm.

David’s family was amazing.  They took me in immediately! Lunch was ready when we arrived. We enjoyed a wonderful meal of vegetable and fruit dishes, rabbit and chicken, all superbly prepared by David’s father. It was nice to meet David’s friends, siblings and his son, who unfortunately was suffering from a bad cold that later developed into whopping cough. As space is tight there, they put me up in a very nice hotel not far away. When we got to the hotel and they all finally left, I didn’t even shower. I was too exhausted after the Wall, the train adventure, and spending the day with the family! 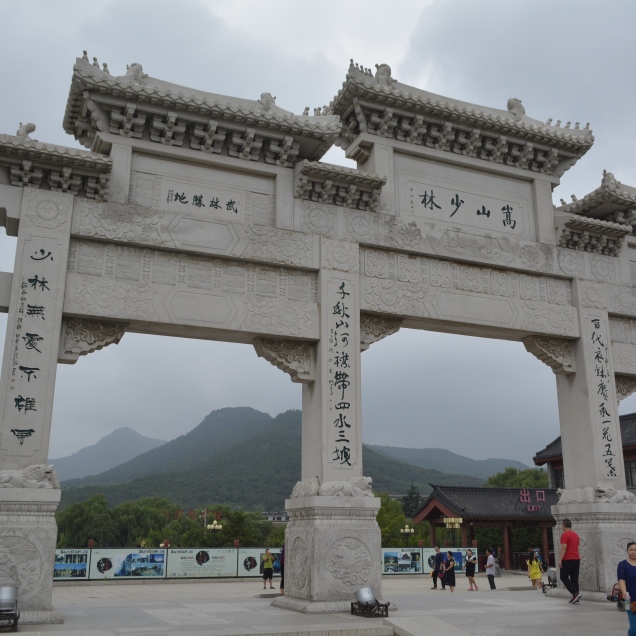 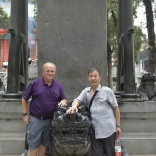 The next morning David’s father, older brother, and friend, Ramon, arrived to take me to the Songshan Shaolin temple of Yongtung. This is a martial arts temple, of course, and they were conducting a summer camp for young boys and teens. The place is borderline tourist attraction, but once you get past all that, there is a quiet side where you can roam the old buildings. Well, maybe not ”roam” with David’s father. He is in his 70’s and walks fast and with purpose. But he learned to just let me tag behind taking photos and patiently waited for me to catch up! I wish I could have spoken Chinese with him because he was such a character! At one point, we arrived at some stupas, as in Thailand sort of a large tombstone, but not really just that. Judging by the form and size, these particular stupas are for important people. But I couldn’t resist watching the pantomime as he acted all this out. He couldn’t think of how to tell me the word “important,” so he made believe he was digging and then popped up and said with wide eyes, “Obama!” Despite the pace, I did manage here and there to soak in some of the ambiance before we left. 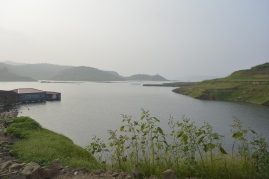 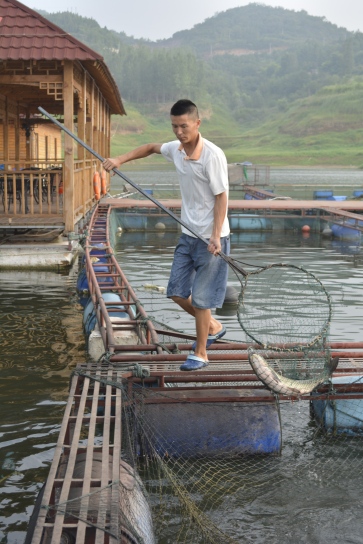 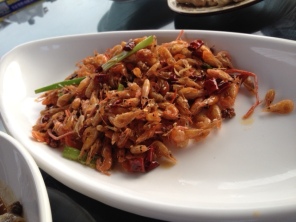 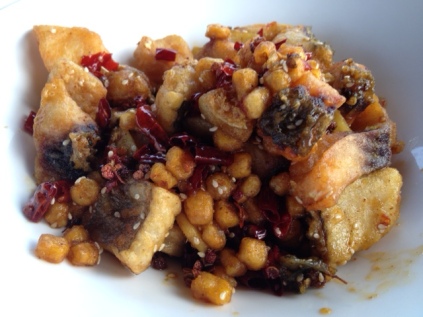 In the evening, a group of us headed for a catfish dinner at a place out of town called Lou Ying Restaurant on the Fang You Sheng Lake (if I got all that correctly). It was a beautiful setting. We even got the chance to pick our own catfish. The honor befalling a 14 pounder! What followed was a dinner of the fish prepared in 5 different ways and tastes. It was amazingly delicious. It was so interesting driving through the countryside down dirt roads to get there and back. I much prefer the small towns and beautiful vistas of this hilly region of China. 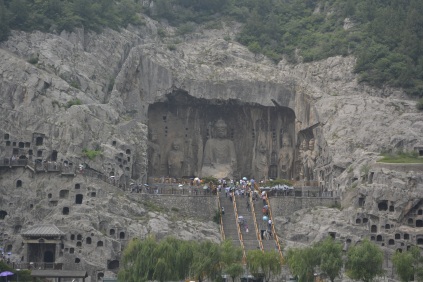 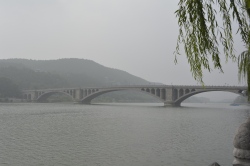 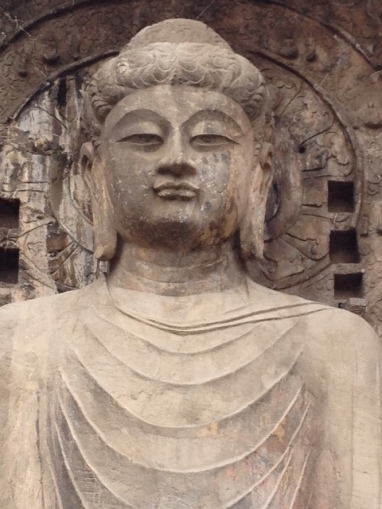 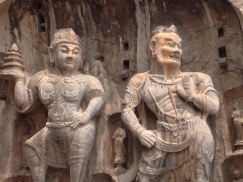 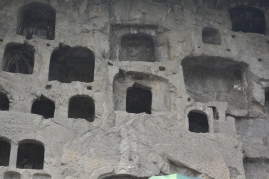 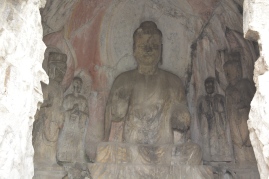 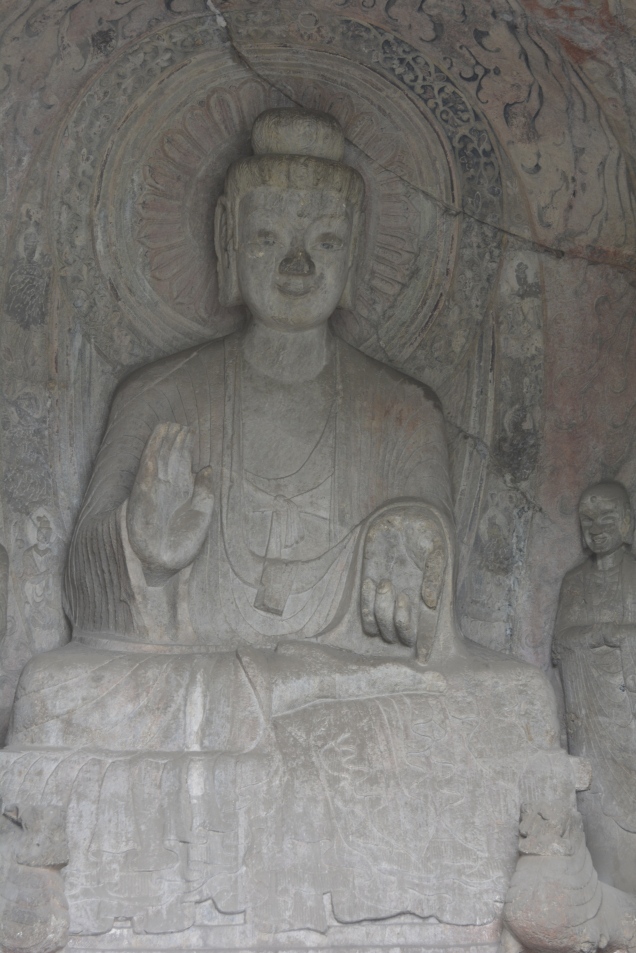 Our destination the next day was the Longmen Grottoes, a World Heritage site, located about an hour from Luoyang. Constructed on both banks of the Yi River, this devotional place was begun in the 4th century AD. Over the next 400 years, benefactors great and small contributed funds for the carvings. It grew to contain about 100,000 images of Chinese deities and Buddha of various sizes, although a number have been removed or stolen over the years. The site is impressive and it is difficult to take it all in. From the towering central images to the near miniscule ones carved on the walls, it is breathtaking. I climbed up and down the much trodden pathways and stairs along the western cliff at times with photographic purpose, but mostly to just sit and enjoy this inspiring spot. I could have spent all day there, but I had to be mindful of my waiting “tour guides” who were nice enough to let me wander here alone, or maybe they just wanted to sit it out in the shade! The last I saw David’s father he was directing me to the central stairway. We were going to meet on the other bank at the exit. When I got there, he was nowhere to be found. His son called him and he was still waiting for me at the base of the stairway! So much for planning! He didn’t think I’d go along the cliff side and come down by the bridge that crosses the river.  I felt so bad for him, I bought him a big bottle of iced tea! Then I remembered that many Chinese do not drink iced liquids in the hot season. Fortunately there was a shuttle bus to take him back to the car parking area, so by that time the tea was the right temperature for his taste!

We returned to town and took refuge from the sun in a restaurant near my hotel. We enjoyed a meal of noodles and skewered tofu and cow stomach— all delicious! 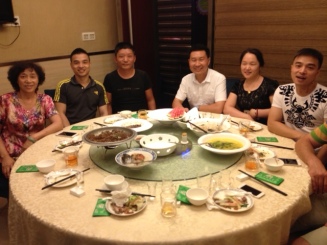 At dinner that night, after perhaps too many shots of Chinese whiskey, one of David’s friends invited us to go to the Longtan Valley Park the next day. I was assured there would be “not that much” climbing, but I hear “valley” and I know otherwise! At 8:30, Ramon, Dani (David’s twin brother), Dani’s son “Larry,” Dani’s friend and his son, “Henry,” arrived and off we went after a stop at Dani’s friend’s snack distributorship to pick up two huge bags of goodies for the two-hour trip 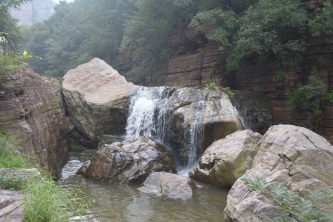 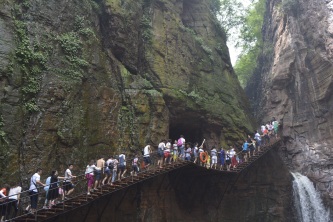 We got there about 11:00 with the predictable crowds. Again you walk through the maze of shops and stalls selling cheap plastic toys for the kids to play with in the park. The walk was not as demanding as the Great Wall, but this walk in the park was not, well, “a walk in the park!” We hiked and sometimes climbed though a very beautiful sandstone gorge with lots of small waterfalls, rapids and pools, not to mention the wonderful sandstone natural structures. What I really liked about this place was that extra care was taken to make it fun for the kids along the way with games, play areas, and little pools to catch fish. The gorge was formed by the Yellow River that once coursed through this area and carved it out over time through the sandstone. It drizzled periodically, so along with the sweat, we were soaked by the time we reached the end. Up stairways and down, sometimes challenging, we made our way on the two-hour hike. At the end, there was another area for the adults and kids to play. Slides and swings for the kids, and wall climbing, zip line rides and rope bridges for the adults who still had some energy left! 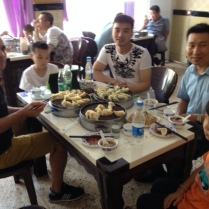 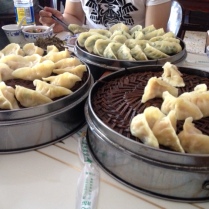 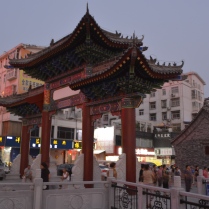 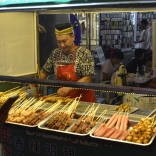 As we had stopped for dumplings (three different kinds, mind you) along the way home, I feigned fatigue and managed a free night. The others were just as exhausted after the day. I summoned up some energy from somewhere in me and I went out in search of the Red Lantern Market. Along the way, people stared, I don’t think too many foreigners visit here yet, but they will. This city has a lot to offer, but with the high speed train, it is only a day-trip away from the more well-known Xi’an, my next destination. People were so friendly and, as I have found countless times in the past, they will come up to you to try some of their English, especially if you are alone. There were some interesting sites on the way to the market, but it was just nice being out on my own doing my own thing! As it turned out, the market was nothing extraordinary, but it did look great with all those red lanterns stringed above. It was too bad that I did not get the chance to explore the old part of the city or the interesting walking street I had seen the night before, but that is always another reason to return!

The next morning I checked out early and went to David’s apartment for a lesson from his father in how to make dumplings. We had so much fun as he gave the whole lesson in Chinese smoking a cigarette the entire time. (Maybe cigarette ash is the secret ingredient!) It’s not as easy as you might think, but I got the hang of it and was grateful that none of them leaked when they were boiled!

I was very sad to say goodbye to this wonderful bunch of people, but the high-speed train to Xi’an awaited! For the next two legs of the trip, I would be on my own. As much as I loved being with all of them, I was not taxed too much in negotiating the culture. I felt sort of in a happy bubble. Now, I’d be on my own for the adventure of meeting whatever came my way! And I couldn’t wait!