Posted on September 13, 2016 by paquettepaul

Returning to the hotel in Xi’an from the Muslim Quarter, I grabbed my bags and went out to the street to get a cab. You would think that one would be available at 3:30, but I waited for 10 minutes with not a one in sight! The bellhop at the hotel told me I should just go down the block and get a #603 double-decker bus that goes directly to the Xi’an Railway Station. Two 603 buses passed me by before another moved and revealed the hidden bus stop! Fortunately, I got to the railroad station with 20 minutes to spare. The place was wall to wall people with bags and boxes of every type and description. It is a very old station. I didn’t even find an Arrivals/Departure board, but really didn’t have the time to look! A helpful attendant directed me to the grand stairway (in the old days it really must have been), and up I went to find my train number and the corresponding waiting room. I had quite a time negotiating up the stairs and the hallways on the second floor because every available square centimeter had something or someone occupying it. I had India flashbacks as everyone jostled and bumped each other to move around. But it wasn’t long before we were all told to board the two trains scheduled for departure. I just let the mad dash of those who felt the neurotic need to sprint to the trains for fear they would be left behind, pass me by. As I later realized another possible reason is that they want to secure a coveted storage space for their bags! I’ve learned a little how to go with the flow in China— you just do what you have to do and let the rest take care of itself—or in this case, themselves!

While I was making my train reservations before I left the States, I decided to treat myself to a “superior soft bed” compartment because the journey from Xi’an to Shanghai would be a 14-hour overnight trip. I travel second-class sleeper in Thailand all the time, but China was an unknown to me. When I was working in refugee camps in Thailand years ago, I always had to travel first class sleeper for security reasons as I’d generally be toting a lot of documents. Long gone are the days of being greeted by an attendant in starch-whites as I got on the largely teakwood car with polished brass fittings at night at a station in the middle of nowhere! As I had traveled this route so frequently, without even asking a plate of fried rice and a pot of tea would soon magically appear! Well, times have changed in Thailand. But I guess it was with some nostalgia that I hoped for a similar experience in China. This is a shared room with one other person in bunk bed style with bathroom “en suite.” My first “roomie” was a young mother and her feisty young son! They booked late and her husband was in a room further down the same car. So six of us got together and reconfigured! I ended up in a room with a young Russian on a 10-day tour with 12 other Russians. It wasn’t long before I found three of them—a mother and daughter and a young guy from Toronto but of Russian background— perched on Serg’s lower bunk complaining to me in heavily accented English about Chinese customs and the tour guide in particular. Further confirmation that solo travel, or with one or two people you know well, is always the way to go! I changed the subject when one of them mentioned the Great Wall. I asked them which section they had gone to, but they just gave me a quizzical look. None could recall the name of the section. It was the Great Wall, that’s all they knew!  Then I asked them what they were going to see in Suchow and they really only had the vaguest of an idea. I think when you do your own planning, as opposed to a tour, and have to rely on your own when things come up, you get so much more out of the experience. It wasn’t long before they left to party with the other people on their tour in the attached restaurant car. 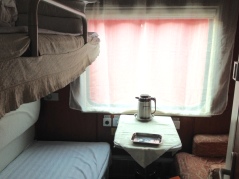 This finally gave me a chance to really check the compartment out. The bunk beds were fine, but at closer inspection I noticed food crumbs! Then more of them! Obviously, the beds had not been changed! I took the untucked sheets off and shook them out in the bathroom. I was reassured to see the toilet blazoned with a banner proudly proclaiming its cleanliness. However, when I took it off and opened the lid, it was disgusting. I don’t think that bowl had seen a brush since the Cultural Revolution. The covering of the padded armchair wedged into the corner of the room was torn and frayed like it had been occupied before my arrival by some sort of monstrous Maine Coon cat! About 9:30, I decided to call it a day, hike myself into the upper bunk, and go to sleep. But before I did, I had to fish out two empty water bottles from under the thin mattress and “dive bomb” them into the small wastebasket below— SCORE!!!!! I drifted off thinking about what I was supposed to do with the ravioli of a pillow they provided for my “superior class” comfort. Yet, maybe it was still better than the trip from Beijing to Luoyang sharing a space with the three snorers and their suitcase full of food! Luckily, my love of train travel wins out over all adversity, but regular train travel here is nowhere near the standards of even the Thai system, especially those of “the old days!”

The Russians left the train at Suchow, so I had an hour before we reached Shanghai. After passing seemingly endless carbon-copied and carbon-polluted views of high-rise apartments and condos, we finally made it to the station. It was 8:30 in the morning, but I decided to give the subway a go. The Line 2 trains were so packed with commuters that they weren’t even stopping at the station, so I decided to go with Plan B—a taxi. Up to ground –level I went. After three rather bizarre encounters with rogue taxi drivers who generously offered to take me to my hotel for “only” 250 yuan, I found the queue for the legitimate taxi service. I had to wait a half hour, but I got to my hotel quickly and for only 28 yuan.

The efficient staff of the Wu Gong Bund Hotel on Fuzhou Street checked me in quickly. The hotel is a bit dated, but as it turned out this was the perfect location—15 minute walk to the Bund, 10 minutes  to the Shanghai Museum and People’s Park, 20 to an old section of the city and 5 in the other direction to the glitzy walking/ shopping area of Nanjing Dong Street and the local Line 2 subway stop!  All that, and it was in a nice, little, old neighborhood besides. Life in Shanghai, so far so good!

Reading this, and the entry on Xi’an, I keep wondering why I’m writing about almost everything BUT Shanghai in this entry. I guess the fact of the matter is that, as in life, the journey is just as important as the destination! And, as the blog site’s name suggests, this IS the wanderer’s tales, so forgive me if my writing tends to meander as much as the old Yellow River! Part 2 on the way!