I was so happy to finally put Seminyak in the rearview mirror for a few days and get on the road heading north. Our first stop was in the city of Ubud, about an hour from Seminyak. Despite a good number of tourists, I like this town very much. When I come back, this will be my home base! The town is quite hilly and is full of arts and craft shops. The place has a character all its own. I directed the driver away from the big touristy batik factory he wanted to take me to. These are always expensive and the quality of the material is not very good unless you are willing to pay for the high quality stuff! I was sorry that I scheduled Ubud for only a morning as it looked like a very interesting city. There are craft areas for silver, wood, batik, weaving and painting artisans to display and sell their work. 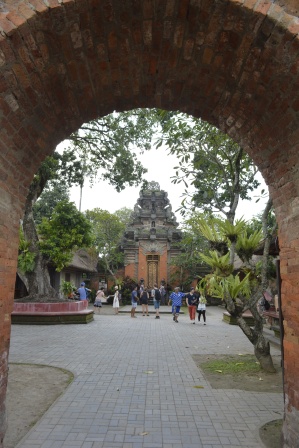 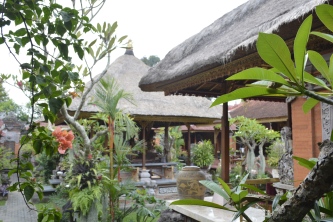 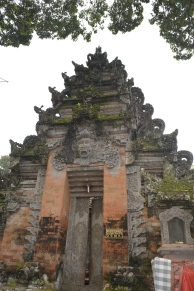 The driver let me off at the tourist information center. The women working there could not speak English very well, but they gave me a map, and I managed to figure things out on my own. While waiting to be picked up, I visited the Puri Saran Ubud, an old palace and “fortification” across the street. It has traditional dancing at night in the courtyard. It was a terrific place to just “take 10” and relax in the garden and wander the area. I met an Australian who was trying to take a picture of the main gate, but there were a number of tourists with the same idea. I walked in the rear area of the puri, and when I emerged, he was still waiting for a Chinese tour group to finish taking many posed photos in front of the gates. When there was a ten second gap, we both charged up our cameras and clicked off a few shots just in time! 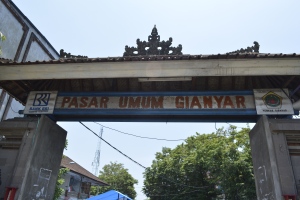 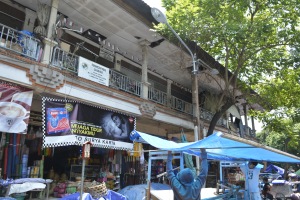 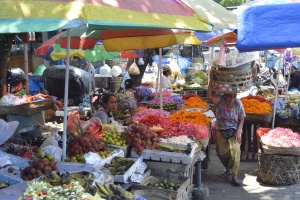 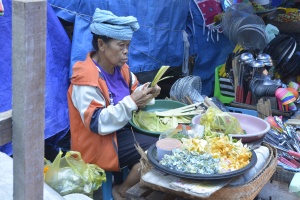 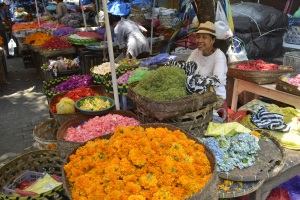 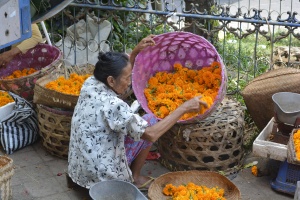 We headed out of Ubud in search of the Gianyar market. I walked the market in the hot afternoon sun, but you could see that this place is busier in the mornings and evenings. Merchants were just setting up their stalls and carts of food for the evening rush. I stopped at a cloth merchant’s shop to buy a sarong and sash. As you are required to wear one at all the pura (temples), this saved me a lot in “rental” fees over the next few days! The shopkeeper’s name was Warot and he spoke passable English. He gave me a quick lesson on how to wear the sarong, which I videoed in case I didn’t get it the first time!  As both men and women wear them, sarongs are worn a different way. Women will tie theirs to the side, while men adjust theirs to the center. Most people actually wear two. One is generally a plain cloth underneath the more colorful outer sarong.

As I continued through the market, I met a lot of friendly people, including the flower sellers. They told me the names of the flowers, and would laugh as I slaughtered the pronunciation! You have to have a thick skin and sense of humor learning a new language!

At 1:30, we stopped for lunch at a roadside restaurant that sold the traditional Balinese dish called “lawar.” It is basically made with rice and chicken (though usually pork) and contained an array of wonderful spices of various flavors to tantalize your taste buds! It also had just the right “kick” from hot peppers, but did not overpower the other spices.

As it was getting late, we pushed on past the terraced rice fields and coffee plantations. We made a fast stop at one of them, where I was given a sample of 10 teas and coffees. I am not usually a coffee drinker, but I did buy a bag of the Balinese coffee. It was excellent— strong and nutty but not bitter, you could drink it black it was so good. They also had one of the most expensive coffees on the planet, Luwak coffee. The beans are fed to civets that eventually “expel” the coffee. It is then cleaned, shelled and ground. A small bag that will reap about 5 small cups goes for $38 US. I wouldn’t be looking for the K-cup at Costco any time soon!

It was now 4:00 and we still had a one-hour drive to get to Lake Batur. We zipped past some wonderful countryside and made the eventual climb up to the caldera (lip) of the old volcano to the hotel where I would be spending the night. I was totally exhausted from the heat and activity of the day, so I ended up enjoying a plate of nasi goreng (fried noodles with vegetables) on the balcony overlooking the lake below. Life is good!

I love these moments of anticipation that we experience in our lives just before we know something wonderful is about to happen. It’s 5:00 a.m. and I am sitting on my balcony at the Cave Hotel in Kintamani in northeastern Bali overlooking the thick fog that will soon rise from the undefined valley below.  I was so glad that when I was checking hotels in this area that I chose this one and not a place near the lake. The hotel is perched precariously on the rim of the caldera of the old volcano. Looking down from the balcony, there is little stopping you from the bottom of the cliff several hundred feet below. The lake is nestled between the imposing Gunung Batur (Batur Mountain) and Gunung Abang.  The grey, mystical soup covers the lake and rings the mountains awaiting nature’s warming prompt to begin its slow ascent to the sky above.

Even at this hour before the sun rises, one by one various life forms awaken, roused no doubt by the plaintive cry of the roosters, followed quickly in the chorus by every dog around the lake. Swallows arrive in shadow to swoop up the stray flying insects before dawn. Smarter butterflies wait till 8 am to finally flutter about. It’s all a visual and auditory symphony played out on nature’s stage. About 5:30, I begin to hear the sputter of motorcycles and people calling out from the villages near the lake. I have no time to even begin to guess what they are saying as the sun has begun to lighten the sky and ascend behind Abang Mountain. Over the next three hours I take more than 100 photos, and a number of videos when I feel the stills cannot even begin to show what I am fortunate enough to be witnessing. Slowly the warmth of the sun starts to churn the cotton candy fog. Some of it oozes its way between the mountains while the rest rises like a dragon with accents of yellows and reds. The sun peeks over the crest of the mountain and allows its rays to play in the creamy fog. With every passing minute you sense the need to pay attention to another part of the landscape as it reveals itself before you- here a sudden patch of green, and there a brown rooftop. Trees and water and manmade structures pop up out of the mist as if they are pieces of a puzzle. By 8:30, the dazzling show is over and I race to get ready to leave as the driver will arrive at 9:00. I must say this was truly one of the highlights of my entire trip!

As we sped away toward a new day of adventure, I noticed the pieces of the roadway that had broken off and fell down the hillside. There was a crew repairing it as we passed. The driver then told me that about a month before, the intense rains had caused a slide in Kintamani, where I was staying. A family of 14 lost their lives as their house plummeted down the cliff! Just shows you how paradise does not come without a price. I was also thankful that I had not heard that story the night before. Probably would not have gotten a wink of sleep in the hotel on the cliff! 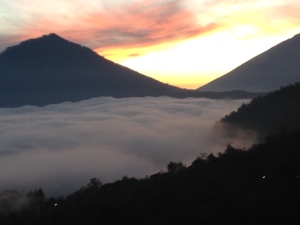 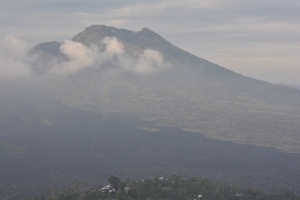 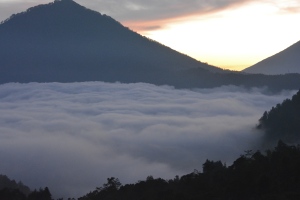 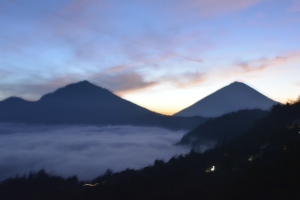 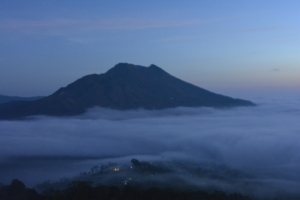 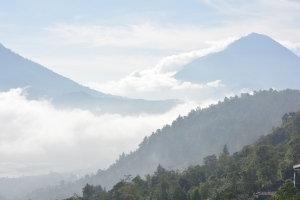 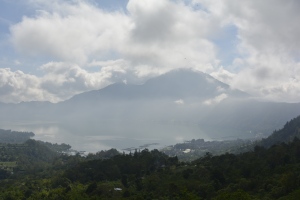 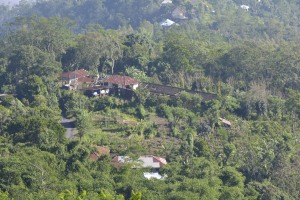 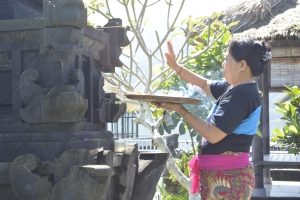 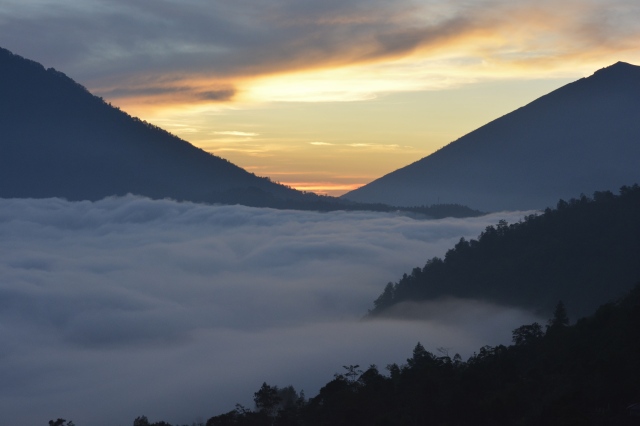